Berlin Wall 33 – “In the Wake of the Russian-Ukraine Conflict” »

The Annual Forum on Cultural Diplomacy 2022 » 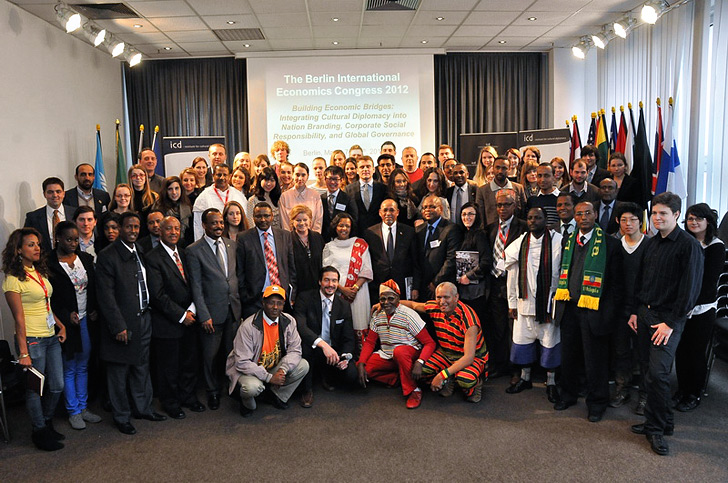 The ICD would like to extend its gratitude to all of the speakers and the participants who attended the conference.  Special thanks goes to the entire UN and Cultural Diplomacy team including; Sylvia Zerbetto, Lisa Jost, Pawel Trzcinski, led by Amy Soar, Hannah Smith and, Claire Leavitt for contributing to the phenomenal success of this exciting and vibrant international event that was thoroughly enjoyed by all involved.

Day one of the conference was opened by a speech fromDr. Supachai Panitchpakdi, Secretary-General of the United Nations Conference on Trade and Development and former Director-General of the World Trade Organization from 2002 until 2005. Dr. Supachai Panitchpakdi gave an insightful speech entitled ‘Economic Bridges: Aims, Incentives and Impacts’, indicating how there is a pressing need for increased interaction across geopolitical borders and that the UN was keen to promote NGOs such as the ICD that are instrumental in pursuing this goal. The key theme of his speech proposed a balance between state-law and market-law to overcome this and is keen to discourage local-centric politics, which is counter to the aims of cultural diplomacy.  This would involve the building of economic bridges where both parties can benefit equally, and development taking place.

Dr. Panitchpakdi’s speech was followed by the Deputy State Secretary and Ministry for Foreign Affairs, Republic of Hungary; Hon. Gergely Pröhle, who discussed “The Importance of Nation Branding in Contemporary International Economics”. Mr. Pröhle highlighted that the power of culture in all its diversity is a prerequisite for peace, and this is more important than ever. Nation branding is one of the many ways of achieving this, and Mr. Pröhle gave a balanced argument aptly illustrating the merits and limitations of nation branding as a concept. Mr. Pröhle finished his speech remarking that cultural diplomacy through nation branding is still useful, especially from a Hungarian perspective, as it is serving to debunk misconceptions.

Following a short break which gave the participants the chance to talk to speakers and socialise over coffee and bagels, the afternoon comprised of a speech by The Irish Ambassador to Germany, the Hon. Ambassador Dan Milhall. He presented his views on cultural diplomacy from the Irish perspective, including Ireland’s unique and endearing nation brand.

The first day was concluded at a reception hosted by the Embassy of Lesotho. The Ambassador of the Kingdom of Lesotho to Germany, Dr. Makase Nyaphisi welcomed the participants to the venue and gave a few remarks on the little know culture of the Lesotho.  The welcome speech was followed by a spectacular performance by a Lesothonian orchestra, rounding up the first day with an enjoyable insight into Lesothonian music. With the joyful melodies taking everybody away to Africa, the first day of conferencing drew to an end.

The second day of the conference, taking place at the ICD house, comprised of speeches from different ambassadors, many of whom set up tables and stands around the ICD house, displaying cultural handicraft, offering food and drinks or simply offering informative material on their respective countries.  The morning started with a keynote address from Tadelech Dalecho, Minister of Culture and Tourism of Ethiopia.  The speech was focused on the importance of building economic bridges in the Horn of Africa and focused on the importance of developing the tourism industry in this area of potential growth. Ms Dalecho emphasised the attraction of Ethiopia’s fossils; “it’s a world heritage and should be used in order to benefit the economy”. The topic then moved to “Significance of Archaeological Tourism & Wealth in Nation Branding: the case of ethiopia” with a lecture and discussion held by His Excellency Ambassador Asghedom Tessema focusing on the role that tourism plays both in the development of Ethiopia and in increasing the level of tolerance and cultural understanding.  Nation Branding is playing a key role in Ethiopia, promoting a sustainable flow of cultural tourism and attracting foreign investment, trade and diplomacy. Another significant speech was the one given by Dr. Berhane Asfaw, an Ethiopian Paleoanthropologist focusing on the archaeological findings in his country that to this day continue to expose stones and fossils dating back 6 million years.

The Ethiopian embassy hosted a reception in the ICD house with typical products such as coffee, tea and food delights. The end of the morning took the conference to another African country, with a speech from H. E. Amb. Anatole Bacanamwo, Ambassador of Burundi to Germany and the Minister of Commerce, Industry and Tourism, the Hon. Madame Victoire Ndikumana. The Minister addressed her speech to both the progress and the challenges that can be still overcome in her country, her main focus was again that tourism could be used as a starting point to improve the countries’ image on an international level, promoting economic growth.

The end of the second day saw some familiar performers at the Institute for Cultural Diplomacy take the stage to treat the participants to the sound of African drums and singing.  Another day of conferencing over, participants spent time socialising with the speakers of the day and experiencing the evening’s cultural event and performance.

The third day of the BIEC conference was arguably the most comprehensive, a day comprising of two principal keynote speakers, Richard Boucher and Professor Eric Stark Maskin, participants were eager to hear their lectures and engagement in discussion was high.

The third day of the lecture program began with the presentation of two participant papers from Malte Kaufmann and Dr. Anne E Witte, two attendee of the conference who were selected to present their research papers to the conference audience.  They addressed the effectiveness of Corporate Social Responsibility in modern business and the role of knowledge in culture respectively. This was followed by a  presentation of tourism and foreign investment in South Africa by the South African Ambassador to Germany, His Excellency Makhenkesi Arnold Stofile.Following this, the CEO of Solvay GmBH; Christian Jourquin, led a lecture and discussion on “Intercultural Diplomacy built on Economic  Bridges” which analysed the role of economics in bringing cultures together. The Embassy of Uzbekhistan then hosted a reception, and a subsequent lecture on Uzbek Nation Branding; which was presented by Amb. Dilshod Akhatov.

Following the hour-long lunch break, the afternoon proceedings were started by Dr José António Pinto Ribeiro, the head of a prominent Portuguese Lawyer organisation. Following his lecture and subsequent discussion were the two most high-profile lectures of the conference. These were delivered by Richard Boucher, the Deputy Secretary General of the OECD; and Professor Eric Stark Maskin, the Nobel Prize-winner.

The two speeches covered two refreshingly different areas - whilst Mr Boucher’s speech covered the practices of international economic organisations and the way they had to tailor their approaches to local conditions, Professor Maskin provided a visual demonstration on how globalization has been a driving force for increasing inequality around the world, and how it has left many of the poorest individuals and communities no better off than before it began. Both lectures were extremely enjoyable and thought-provoking, and both encouraged long discussions in the following question and answer sessions. Both speakers engaged in interviews with ICD staff members following their presentations, in which they built upon the topics they had discussed in their lectures, and offered their opinions  on other topics; such as the role of cultural diplomacy in the multilateral trade negotiations, the European economic crisis and the nature of US politics.

The day was brought to a close in style with a presentation of Indonesian culture held in the lavish settings of the Westin Grand Hotel. The event, hosted by the Indonesian Embassy in Berlin, involved speakers, dancers, music and traditional Indonesian cuisine.

The day finished with a true high-point of the conference, a reception at the Westin Grand Hotel on the beautiful Unter den Linden, hosted by the Indonesian Embassy in Berlin.

The fourth and final day of the Berlin International Economics Congress 2012 had a substantially shorter timetable than that of the preceding days, with the plan being to draw the conference to a close at lunchtime. The day began with participant presentations from Marcus Ruge and Constantin Adrian-Blanareu. These were followed by an extended presentation on the theme of ‘The Impact of Developing Nation Branding in the Promotion of Tourism in Panama’. The highlight of this particular presentation was a unique ‘Tamborito’ dance performance by a pair of dancers dressed in traditional Panama costumes. This lively dance went down very positively among staff and participants, and was a valuable insight into an aspect of culture that is rarely exhibited in Europe.

Following a short interval, Ambassador Prof. Dr. Isaac C. Lamba of Malawi brought the conference to a close with a presentation and discussion on the challenges of economic development in Africa in the 21st Century. The Ambassador held an interview with ICD staff after his lecture, in which he recognised the responsibility that African states had to push each other towards achieving more equal societies; in terms of gender, religion and race. This seemed a final, fitting sentiment on which to end a highly successful conference.