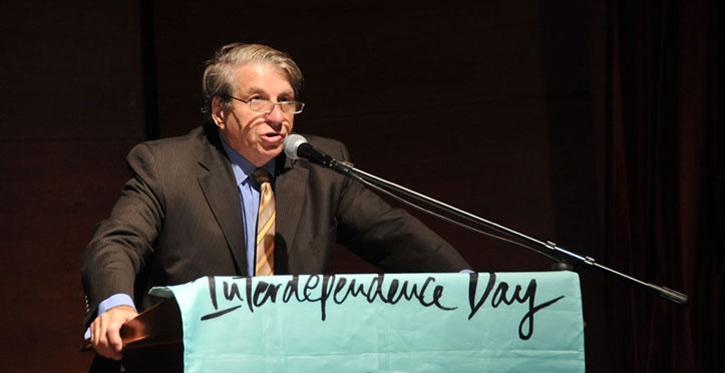 Following seven successful Interdependence Day Celebrations and Forums starting in 2003 in Philadelphia and continuing in Rome, Paris, Casablanca, Mexico City, Brussels, and Istanbul, Professor Dr. Benjamin Barber and his global NGO "CivWorld at Dēmos" successfully held Interdependence Day VIII, which took place in Berlin, Germany from the 8th-13th of September, 2010. Under the theme of Sustain/Ability, the eighth annual Interdependence Day Celebration and Forum focused on the critical issue of climate change to examine the crisis of global warming and climate justice in the frame of interdependence. The roles of global cities, the arts, new technologies and the private sector were also examined as key areas of discussion.

As always, Interdependence Day in Berlin brought together leaders from the worlds of scholarship, religion, civil society, politics, and the arts and included scholarly seminars, public debates, artistic performances, and exhibitions. On Interdependence Day, September 12th, the delegates were joined at the Rotes Rathaus (Berlin City Hall) by members of the Berlin community to memorialize victims of terrorism around the world, and celebrated the constructive future which can be created only through the recognition of interdependence. Interdependence Day honors September 12 as a post-9/11 symbol of regeneration, as a time to reflect on the range of global challenges that can be solved only through the acknowledgment of interdependence.

As in both of the last two Interdependence Day celebrations, the Global Interdependence Youth Summit was held concurrently from September 8th to 13th and it engaged young people from many countries both in their own activities and in its panels and seminars. Young leaders from The Gathering for Justice, Brotherhood Sister-Sol, the W. Haywood Burns Institute, OneVoice, and many other organizations, including The Institute for Cultural Diplomacy, met to tell their own stories of interdependence and learned about the theory and practical work of interdependence which defines the  Interdependence Movement.