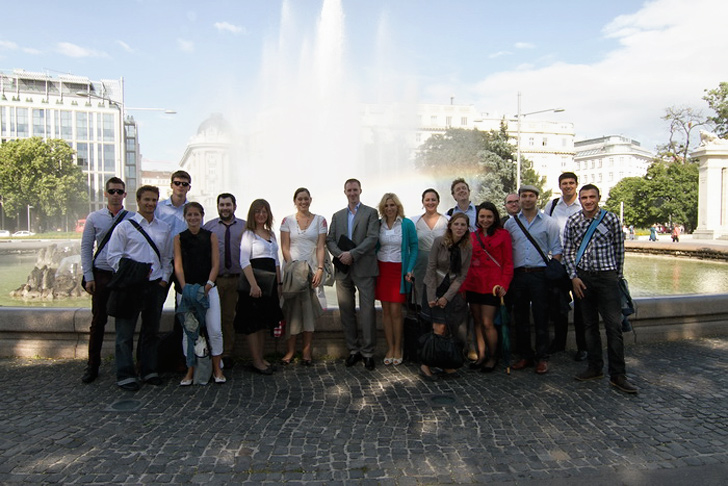 The ICD would like to extend its sincere gratitude to all those in the organisation of the conference and to the entire Cultural Diplomacy in Europe team including; Tatyana Sehic, William Hernád and Kateryna Kononiuk.

We were supported by the Municipal Department of Vienna MA7 and by the Ministry of Education and Culture to organise our Art event at the Vienna Votiv church, by the parish of the Votiv church, by Red Bull and by Backery Ströck for refreshments.

Finally, the ICD and all of the organisers would like to thank the participants and speakers, whose enthusiasm and participation were a vital contribution to the phenomenal success of this exciting and vibrant international event that was thoroughly enjoyed by all involved.

The ICD was delighted to welcome a diverse group of young leaders from three different continents to Berlin to discuss ways of promoting cultural relations in Europe.

After a warm welcoming address by the conference manager Tatjana Sehic, the conference opened with talk from Dr. Michel Cullin, Professor of the Vienna Diplomatic Academy and head of the Felix-Kreisler Institute, together with Yoann Longuestre, associate researcher on “Republic of Austria - now  and then- focusing on Austrian Monarchy heritage”. After lunch, Dr. Cullin opened a debate on the creation of national identity by Austrians and French in relation to the ‘Republic Constitution’. Afterwards, Dr. Andreas W. Stupka, Head of Department of the Institute for Social and Human Sciences Military Academy Vienna, discussed  the ‘necessity of intercultural competence for armed forces in peace support operations’.
The afternoon session ended with a short excursion. Mr. Yoann Longuestre led the group through various important historical, cultural and political places of Vienna and the day drew to a close with a  concert at the Vienna Votiv church. The concert was entitled ‘Music and Dance Across Cultures’. After an introduction by parish assistant Mr. Esh, the programme continued with a suite from J.S. Bach, performed by the cello musician Mag. Bertin Christelbauer. This was followed by Indian dancer Dr. Radha Anjali and Ethiopian dances by Abate Dejanev. They performed to ancient songs from Cyprus, performed by the Chryso Makariou. The concert ended with traditional olives, bread and wine, provided by the Embassy of the Republic of Cyprus.

Day two of the conference began with a talk from H.E. the Ambassador of the Republic of Cyprus, Costas Papademas. He introduced the “Priorities of the Cyprian Presidency in the Educational policy of the EU”. His presentation was followed by a lecture by Dr. Gebhard Selz, Director of the Institute for Oriental studies University Vienna on the topic of "Translating Histories and Cultures with case studies onthe (early) Middle East. After lunch, H.E. Tanja Milasinovic-Martinovic, Ambassador of Bosnia and Herzegovina introduced the ‘Contribution of the Bosnian and Herzegowian Cultural Herritage to the European and World Culture’.
The afternoon continued at the Embassy of the Republic of Croatia with an interesting panel discussion on cultural diplomacy in the fields of national and international relations. Participants enjoyed keynote speeches from H.E .Ambassador Gordan Bakota about intercultural heritage within Croatian state and its challenges, and from Dr. Erhard Busek, Chairman of the institute for Danube region and central Europe, about ‘Building of the European cultural Identity’. Others included a lecture by Simona Noja, former Principal Dancer, and Director of the Ballet School of the Vienna State Opera. She spoke about ‘Dance Legacy as Soft Power Strategy’. Afterward, Petar Tyran, editor of the Croatian weekly Hrvatske Novine shared his views about cooperation with Burgenland Croatian communities within Hungary, Slovakia and Austria. Mr. Christelbauer Bertin, orchestra musician, discussed the international aspect of Austrian classical music and his personal identity as a musician. The discussion was moderated by Tatjana Sehic and Dr. Michel Cullin and ended with reception hosted by H.E. Ambassador Gordan Bakota.

The day started at the Haus of the European Union with the welcome speech by representative of the European Commission in Austria, Mr. Richard Kühnel. Mr. Robert Pobitschka followed with his lecture ‘Music as the Great Mediator of basic Structures’. Afterwards, Dr. Erhard Busek focused on ‘how Europeans can share their cultural capital in education’. Mr. Lukas Petri, from the National Agency for Lifelong Learning shared his experiences of the Erasmus program and discussed the challenges for intercultural education. Tatjan Sehic presented the ‘Feathers and Branches of Cultural Diplomacy in Education’ with a focus on the sharing of knowledge capital through formal and informal education.
The participant presentations were followed by a panel discussion entitled The role of the OSCE in post-conflict realities’. We were joined by OSCE experts Mr. Roberto Montella, Director of Field Operations, Mr. Marko Bonabello, Mr.Oleh Herasymenko and a PhD candidate, Ms.Laura Cuzzocrea. After a short break, the evening part of the program commenced with a focus on languages, at the Banquet Hall of the Vienna´s 9th district. After a keynote speech from Tatjana Sehic about ‘moving across languages and images‘. Taking part in a workshop, participants could share their ‘language capital‘ and exchange some new attractive words. LineIn Community presented their project ‘Slavistik is not dead‘ with a short movie and Dr.Hannes Schweiger from the University of Vienna German Studies department, presented his lecture about entitled ‘The Significance of Cultural Competence in Foreign Language Learning“. The evening program ended with with refreshments which had been donated by the Embassy of Turkey.

The fourth and last day of the conference started at the House of the United Nations with a welcome reception by Dr. Arthur Hirsh, Director of the Webster Unversity of Vienna, and Ms. Maria Naderhirn, United Nations Vienna/Visitors Service. Our programme started with the welcome speech by Ms. Sonja Wintersberger, Deputy to the Director of the United Nations Information Service (UNIS) Vienna. This was followed by the lecture from Dr. Arthur Hirsh, director of the Webster University Vienna entitled ‘The Challenge of Delivering American University Education in the European Higher Education Landscape’. H.E. Ayşe Sezgin, Ambassador of Turkey in Vienna then discussed “Relations of Turkey and the European Union with the special focus on Education”. Her presentation was followed by H.E. Eugenio dÁuria, Ambassador of Italy, who talked about ‘Italy’s Richness in Culture, Arts and Landscape in a globalized World’. The presentation included an interesting film.
Lunch break was connected with a guide through the Haus of the United Nations. Our programme continued at the Brunnenpassage with presentation on the Caritas project “Art for All” by Mag. Anne Wiederhold, Artistic Director of the Project.
Last stop was a City Hall where participants shared some future perspectives with international food.

“Peace in an achievement of Culture. Force is an instrument to keep the peace. ” - Dr. Andreas W. Stupka

“When notions and concepts are different, it is difficult to translate” - Dr. Gebhard Selz

“Music is interrelated to our internal body and development” - Robert Pobitschka

“Overcoming borders is extremely important. The real challenge for education is to know each other.” - Dr. Erhard Busek

“Parents are the first diplomat of Education” - Tatjana Sehic

“The whole population is paying taxes to allow the middle- upper class have access to Education”- Dr. Arthur Hirsch

“We live in a globalised village” “Turkey is becoming a source of inspiration to other Muslim countries as it shows that human rights laws are implemented” - H.E. Amb. Ayşe Sezgin

“A humanistic approach is an essential component in any development” - H.E. Amb. Eugenio d’Auria