Editor in Chief of Arab News

Faisal J. Abbas is an award-winning journalist, author and public speaker – renowned globally for his contributions to The Huffington Post since 2008 and his editorship of Al Arabiya News, the English language platform of Al Arabiya News Channel since 2012.

A pundit on current Arab affairs and an expert on the Middle Eastern media landscape, he has given talks at some of the world’s most reputable academic institutions such as Cambridge, LSE, SOAS, LAU (Lebanon), and Globis (Japan). In addition, he participates in several major conferences organized by the World Economic Forum, Arab Media Forum, Aspen Institute Italia and the Institute of Public Diplomacy (Berlin). He writes regularly for Al Arabiya English, Gulf News, Saudi Gazette and also provides frequent commentary on Arab affairs for the likes of BBC, CNN and others.

Born in 1982; Faisal grew up in Jeddah, Saudi Arabia and attended a boarding school in Amman, Jordan before obtaining his bachelor degree in 2003 from the Lebanese American University (LAU). He later obtained a Master’s Degree in Marketing Communications from the University of Westminster in London.

During his time at LAU, Faisal also began his professional career in journalism; taking on a full-time job as a news reporter and producer for Lebanon’s Future Television Network. He later wrote for the Pan-Arab daily, Al-Hayat Newspaper. 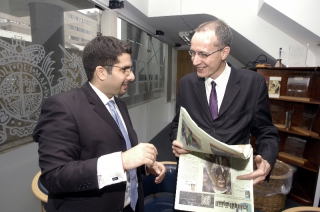 Between 2004 and 2009, Faisal moved to London where he worked with the leading international Arab daily Asharq Al-Awsat. Faisal founded and edited the newspaper’s Media Supplement as a dedicated weekly-section which covered topics such as: journalism, advertising, PR, television, as well as social media on both regional and international levels.

Apart from managing a team of reporters; Faisal contributed to the supplement himself by interviewing the likes of Anthony O’Reilly of the World Association of Newspapers, Seymour Hersh of the New Yorker, Thomas L. Friedman of The New York Times, Bill Emmott of The Economist, Alan Rusbridger of The Guardian, Robert J. Thompson of The Times, the BBC’s Nigel Chapman; CNN’s Chris Cramer and Tony Maddox.

He also was the only Arab journalist to interview Google’s Larry Page, Sergey Brin and Eric Schmidt at a round-table discussion during the 2008 Zeitgeist annual forum. 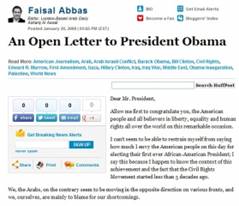 In 2008, Faisal established his personal blog under the title “Media: an International Arab Perspective”; shortly afterwards he was among the first Arab bloggers to join the World section of The Huffington Post.
One of Faisal’s most memorable contributions with The Huffington Post was the highly-acclaimed “Open Letter to President Obama”. The letter was posted on the inauguration day of the current US President and called for more understanding and a new beginning between the United States and the Arab World.

In July 2012, Faisal was appointed as Editor-in-Chief of Al Arabiya News Channel’s English service. Commenting on the appointment, Abdul Rahman al-Rashed, then General Manager of the channel said: “Faisal is among the most distinguished young journalists and it is a pleasure to have him on-board to continue taking the website forward.” 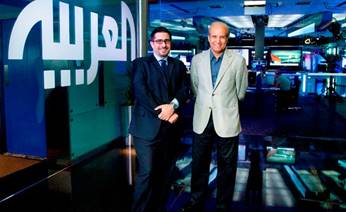 Faisal oversaw the restructure, expansion and relaunch of the English service with a vision of taking it beyond being a site and into becoming an integrated service catering to an international audience seeking to understand the Arab perspective.

In November 2013, the site was re-launched at a major event which took place at Dubai’s Armani Hotel under the theme of “Bridging the communication gap between East and West.” The event included two panel discussions which tackled the issues facing Arab lobbying in the West and another on how and why Western journalists sometimes misunderstand the region. The event concluded with a gala dinner. HRH Princess Rym of Jordan, who is a former CNN reporter and the founder of the Jordan Media Institute, was the key note speaker.

Thanks to an integrated social and marketing strategy as well as to a more focused editorial strategy, the news site became renowned for blending adapted exclusive Al Arabiya television content and creating original features and analysis which sought to explain the complexities of the Middle East to non-Arabic speakers- , www.alarabiya.net/english is an internationally recognized and reliable news brand.

During his time as editor, Faisal published Op-Eds opposing the ban on women driving and male-guardianship practices over women in Saudi Arabia. He also was a fierce critic of the 2016 ‘Brexit’ vote. Drawing an analogy with the 2011 Arab Spring, he slammed the ‘Leave’ campaign leadership for failing to take responsibility for what they have called for and warned of a ‘disastrous aftermath’. Faisal also sharply criticized President Obama’s pursuit of the controversial Iran nuclear deal. While arguing that a nuclear-free Tehran is definitely better for global stability, the way the deal was orchestrated without any consideration to the interests and safety of Gulf allies, leaves Iran – a country which is already accused of being a state-sponsor of terrorism – unshackled and able to do more harm in the region. Because his views were almost identical to those of the Israeli government at the time, Faisal’s column caused much controversy regionally and internationally. 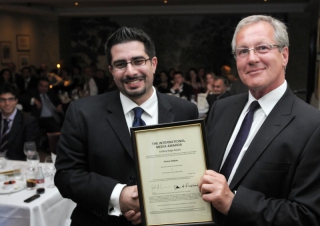 Faisal’s work has been described as both “insightful” and “honest” by veteran Washington Post columnist Jim Hoagland, “An important voice in Middle Eastern journalism” by Professor Adrian Monck – former head of journalism at City University as well as a “unclouded by bigotry” by former ABC reporter and Boston University professor, Bob Zelnick.

In May 2009, Faisal’s work was honored with a prestigious “Cutting Edge” award from the International Media Council. The award was presented to him for his “continuing efforts both through his blogging and in the press to encourage standards of excellence and counter the dissembling that would otherwise increase levels of misunderstanding”.

Faisal’s work has been also cited in a large number of academic research and books, these include:

Among his many other achievements; Faisal is an alumnus of the State Department’s Edward R. Murrow Excellence in Journalism International Visitors Programme, he also served a senior judge at the 2009 Foreign Press Association annual Media Awards and is a member of the National Union of Journalists (NUJ) , the Society of Authors (SoA) and an Associate Member of the Cambridge Union Society (CUS).

Faisal J. Abbas speaks during the International Symposium on Cultural Diplomacy in the Arab World in Berlin, June 2016