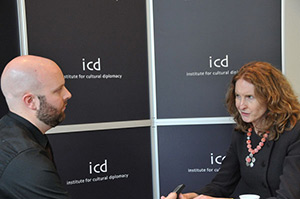 Elizabeth Corwin has been the Cultural Attache at U.S Embassy in Berlin from 2009-2012. She studied at Columbia University in New York and The Johns Hopkins University. For 27 years Corwin worked as a Counsellor of the United States of America as well as working from 2003-2007 at the U.S Embassy in Athens. She represented the United States Government in four different countries and has initiated short and long-term educational, cultural and media strategies. Corwin's main interests are in helping women, underserved populations, animals, the environment and the arts.


A Lecture by Elizabeth Corwin, Cultural Attache at U.S. Embassy in Berlin

An Interview from Elizabeth Corwin, Cultural Attache at U.S. Embassy in Berlin

Q1. The United States prefers dealing with European countries separately, rather than the EU. What effect does this have on Euro-American relations, and do you think the United States would be better served diplomatically, if they dealt more directly with the EU instead of individual European states?

I don't agree that the United States prefers dealing with individual European states instead of the EU. You have to look at the topic, and if it's a case of where decisions are being made by the EU, the United States will deal directly with Brussels, although we often need to deal directly with individual European states as well because EU states vote independently, and take steps and measures and implement decisions in their own countries. So we deal with both. We're about as comfortable dealing with the EU as the EU member states are themselves. In many cases, many EU countries do not want to work for the EU, but would prefer to work independently with the United States, as well as other European states. It's not a monolithic organization and we do work closely with the EU on economic issues and other issues where countries have ceded more control to the EU. The EU hasn't progressed quite as far in forging a common foreign policy.

Q2. With ever increasing globalization, do you see an increase or decrease in "Americanization" and what effect will this have on American cultural efforts in the future?

Q3. From a cultural standpoint, what is the biggest misconception regarding American culture?

There are so many misconceptions and they cover the whole range of positive and negative misconceptions. One extreme is that people think we are all incredibly rich and live in wonderful houses living fantastic lives, while other people think that we can't walk down the street without getting shot. If you are talking about culture as Hollywood movies, film, and theatre, people tend to think our entire culture is 'pop-culture.' They don't realize there is much more to it than Britney Spears or "Glee", but we do have terrific offerings in all fields of culture. What is imported from the U.S. to other countries is generally the stuff that is 'easy' and translates well or doesn't need translation. The United States used to send orchestras overseas, but it became too expensive. Orchestras still travel on their own thanks to private sponsors. The New York Philharmonic will be here next year, and the Lincoln Center Jazz Orchestra was here, but the problem is always money. But now, you can go on the Internet and download music, and the people that go on the Internet can going to find the great philharmonic orchestras or bluegrass music. Promoting it to the world it's simply a case of money.

Q4. America is a truly diverse nation, but do you think its possible for America to create a unique yet consistent national brand?

No, because America changes all the time. We can't have a consistent national brand as it would only last for a few years, and then we would have a new United States. It's amazing how quickly our culture changes. Every time I go back it feels like I need a re-orientation on what America is.