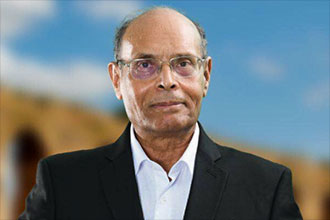 Mohamed Moncef Marzouki was the first democratically elected president of Tunisia after the January 14th Revolution in 2011, a seminal moment in modern Arab history which heralded the onset of multiple popular revolutions throughout the Arab World. Elected to the presidency by the Tunisian National Constituent Assembly, President Marzouki is Tunisia’s first president in modern history to arrive at his position through fair and transparent elections.  Upon the assumption of the presidency,. Moncef Marzouki embarked on mission to “open the doors” of the presidential palace through campaigns of transparency, participative democracy, and by encouraging a safe public space for civil organizations to flourish. During his mandate, Moncef Marzouki was a voice of social and revolutionary activism, calling for civilian rights, curtailment of the security apparatus, and economic sovereignty, and transformed the presidency into a position of service to the Tunisian public.  Occupying a middle ground between secularist and Islamist political standpoints, Moncef Marzouki was instrumental in creating a dialogue between all political, social, and religious tendencies in Tunisia, clearing the ground for an inclusive, stable, and consensus-based Tunisian democracy to take root.

Moncef Marzouki is a doctor of medicine, a human rights activist, an author of numerous works on political philosophy in the Arab world, and founder of the center-left Congress Party for the Republic (CPR), which was one of the parties that formed the governmental coalition from November 2011 to February 2014. In 2015, Dr. Marzouki founded the Movement for Popular Citizenship (“Harak al sha’b al muwatineen”), a civil movement seeking to encourage active citizen participation amongst all Tunisians, particularly those marginalized under previous regimes.

Dr. Marzouki was born on July 7, 1945 in Grombalia in northeastern Tunisia and grew up in the capital city of Tunis, where he attended the prestigious Sadiki School. Due to his father’s political activism, Marzouki’s family was forced into exile in Morocco where he spent the remainder of his youth. Leaving Morocco to continue his education in France, Marzoukiearned his medical degree from the University of Strasbourg in1973 and went on to practice medicine as a specialist in preventive medicine and neurology. He also has a degree in psychology from the Faculty of Arts of Strasbourg.

Returning to Tunisia in 1979, H.E Marzouki lectured in medicine at the Medical University of Sousse until he was sacked in 2000 for his political activism.. In 1980, he joined the Tunisian League for the Defense of Human Rights, of which he became chairman in 1989.

In 1993, he was referred to justice after creating the National Committee for the Defense of Political Prisoners. In response to his dismissal from the chairmanship of the league due to political pressure, he stood for presidential elections in opposition to former dictator, Zine el-Abedine Ben Ali. He was subsequently imprisoned by the security apparatus and put in solitary confinement in March 1994. H.E Moncef Marzouki was released in June of the same year following a national and international campaign and the intervention of South African President, Nelson Mandela.

In 1997, Marzouki and a number of activists created the Arab Commission for Human Rights which he chaired until 2000. A year later, he and many Tunisian activists and political organizationsclandestinely created the National Council for Liberty. In the same year, he also created the Congress Party for the Republic (CPR), which was declared an illegal organization by the Ben Ali regime. From that time, Marzouki announced that his party was a resistance movement, not an opposition one. Through the CPR, he called for deposing President Ben Ali instead of attempting to reform it. Consequently, H.E Marzouki was sentenced to one year of prison. This sentence brought international pressure on the Tunisian government, following which H.E Marzouki immigrated to France where he continued his struggle in exile through his political publications and activities in human rights organizations.

Marzouki returned to Tunisia in 2011 after Ben Ali fled the country and was elected by the Tunisian National Constituent Assembly as the first president of the newly democratic Tunisia.