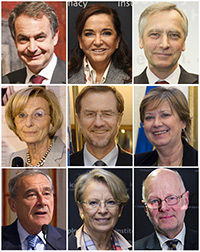 In Discourse with European Leaders »

Introduction to the Program

Whilst there is ongoing discussion regarding the geographical reaches of “Europe”, there is widespread acceptance that the region has played a profound role in global affairs over the past 500 years. This influence remains strong today. Around 25% of the world’s total GDP comes from EU member states, despite comprising less than 10% of the world’s population. Two of the five permanent members of the United Nations Security Council are European, as are four of the world’s 7 largest economies. The establishment and growth of the European Union is widely acknowledged as a success, having laid a foundation for peaceful inter-state relations and economic growth. Indeed, the success of the European Union is best reflected in the desire for ever more countries to join.

Despite Europe’s prominent and success, however, the region faces a number of significant challenges. Economically, it has been hit hard by the global financial crisis, and recent Eurozone bailouts of Greece and Ireland have caused anxiety and disagreement between states. In political terms, the EU faces an uphill struggle if it is to speak “with one voice” as some member states desire and a majority acknowledge would be beneficial.

Europe is, and will remain, a key global player. In order for it to consolidate its political and economic influence at today’s levels, however, it must face difficult choices. It is in recognition of these challenges that the ICD has created the program Cultural Diplomacy in Europe.

In recognition of the program aims outlined above, Cultural Diplomacy in Europe activity will address the following academic themes: