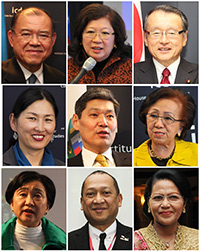 In Discourse with East Asian Leaders »

Introduction to the Program

Cultural Diplomacy in East Asia (CDEA) is a program established by the Institute for Cultural Diplomacy aimed at exploring and analyzing the East Asian region and its growing prominence in an increasingly globalized world. The program was developed in order to strengthen relations between cultural groups and countries within East Asia, to improve relations between East Asian and other geographical regions, and to support East Asia in playing a more influential and constructive role in addressing global challenges. The program pursues these aims first and foremost by bringing together individuals of diverse professional and academic backgrounds, from across the world in order  to discuss salient political, economic, and cultural issues affecting the region. These events sustain an international network of likeminded individuals, and generate best practice guidelines and suggestions for policy-makers and practitioners at all levels. The program also supports research related to its goals, which is then published online or presented at our conferences.

Program activity includes Young Leaders’ Forums, International Conferences, and other individual events, all of which balance academic components with cultural and social activities. The program brings together diplomatic and political representatives, academics, journalists, civil society practitioners, students, young professionals, and other individuals with a keen interest in the East Asian region. Participants engage in a diverse range of activities which are designed to raise awareness of issues concerning the region and its ongoing development. All events feature notable speakers from the fields of academia, international politics, diplomacy, and civil society, ensuring a thorough, interdisciplinary analysis of the key themes.

CDEA brings together students and young professionals from around the world to discuss contemporary affairs in the Eastern Asian region during weeklong study tours in Berlin. The study tours provide the participants with an opportunity to learn more about salient political, economic, and cultural issues concerning the region and its ongoing development. In addition to academic components, participants take part in a diverse range of cultural and social activities that provide them with an opportunity to expand their personal networks and learn more about East Asia.

Cultural Diplomacy in East Asia: A Forum for Young Leaders (CDEA) is a network of students and young professionals who have an interest in exploring and strengthening relations with East Asia and between East Asia and the rest of the world. Participants join the forum by taking part in a CDEA Weeklong Seminar, following which they are encouraged to conduct their own research and organize their own activity in the field. ICD Weeklong Seminars are targeted at students and young professionals with an active interest in the East Asian region.

In addition to the weeklong study tours organized by the Young Leaders’ Forum, Cultural Diplomacy in East Asia hosts a diverse range of conferences, lectures, and panel discussions. These events, which take place in different locations across Europe and East Asia and are open to the public, play a key role in raising awareness of the issues outlined in the academic aims above. These events feature high-profile speakers from academia, international politics, diplomacy, and civil society, ensuring a thorough, interdisciplinary analysis of the subjects.

As an organization working to strengthen intercultural relations, the ICD conducts and publishes relevant academic research related to the academic themes outlined above. This research is conducted by the ICD Staff and Advisory Board, members of our international network, and other key program stakeholders. All research material is published online and, when possible, presented at our events.