The University of Bucharest, Romania

"The Parallax Effect on Long Hair"

„A World without Walls“

„To a World without Walls“

"You can't Fight while You Are Dancing”

"The Power of the Arts to Promote Global Peace"

An Interview with David Soul (Celebrated American Actor and Singer)

"The Artistic Cultural Diplomacy Forum 2017" is an international event series taking place in Berlin from February – December 2017 (the first event will take place from 16th – 19th February 2017) to explore the potential for art and music to provide a neutral platform for cultural exchange. Artists and practitioners from the fields of music, film, performance art, digital art, literature, and painting, will share their perspectives alongside renowned artists and leading figures from international politics, diplomacy, academy civil society, and the private sector.

For decades, all forms of the arts have served as a powerful, effective vehicles to inspire and enable people to build cultural bridges and come together towards prosperous peaceful relations. Over the course of many years now, people have discovered the unique potential of the arts and in particular music, cinema, and performing arts to transcend cultures, serving as common languages to bring together different groups and communities. These unique qualities have the unparalleled strength to continuously effect people and over time sculpt human society closer to the ultimate goal of global peace.

"The Power of Film & the Arts to Build Peace" will be celebrated during the conference and examine the immense transformative value that the arts and music hold as vehicles of Cultural Diplomacy. The vision of the conference is to bring an interdisciplinary mixture of celebrated artists, high level representatives from the film industry and practitioners of Cultural Diplomacy in order to prepare an agenda for after the conclusion of the conference, which will initiate programs and initiatives that will support global peace.

Based in Berlin, the event series will be hosted in the ICD House of Arts & Culture, the German Parliament and several hotels in Berlin. 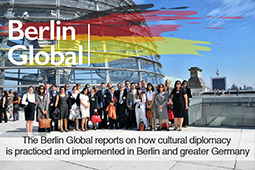 There is nowhere quite like Berlin. Few other cities have played such an instrumental role in global affairs over the past 100 years. It has been, in every sense of the word, a battleground; not just for armies, but for the ideas and philosophies that are the very foundations of politics and society. Berlin remains a cultural extravaganza to this day, with young people from across Europe flocking to the former Eastern part of the city: Cheap accommodation, a thriving cultural and artistic scene, and a vibrant nightlife await them. In the center of the city, Berlin's status as the capital city of Europe's largest economy and the driving force of the EU is increasingly apparent: International NGOs and multi-national companies are establishing office and headquarters here. It was little surprise that US President Barack Obama choose Berlin as the location for his first public speech in Europe, addressing an audience of hundreds of thousands, he proclaimed "look at Berlin, where a wall came down, a continent came together, and history proved that there is no challenge too great for a world that stands as one." (More)