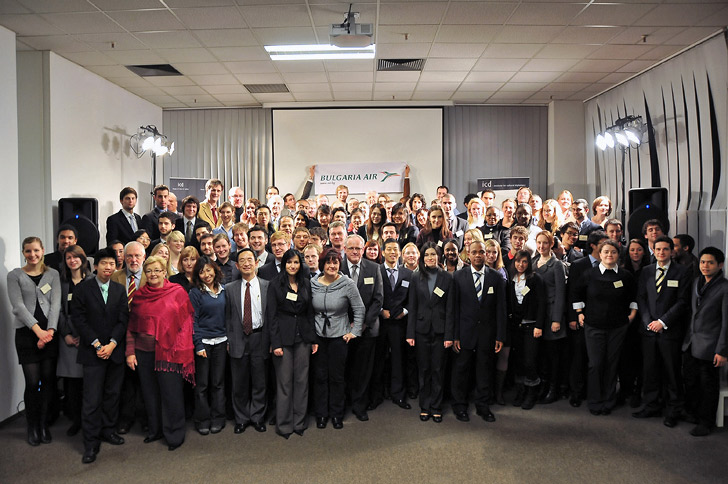 The Institute for Cultural Diplomacy hosted the Berlin International Economics Congress (BIEC) from 4th to 7th February 2010. The program brought together a group of speakers consisting of 36 leading figures from international politics, academia, and civil society, and more than 100 participants, to discuss salient issues surrounding the role of global politics and civil society in international economics.

Discussion ranged from the causes of the global economic crisis to international cooperation on climate change and the future of the world economic order. In addition to individual speeches, the BIEC included debates and moderated panel discussions, as well as social and cultural activities that provided an informal opportunity for further discussions and networking.

The congress began with a series of lectures focused on climate change and sustainable energy policies. As the day progressed, the focus turned to the German economy in the wake of the economic crisis and the role of economics in fostering stability throughout Europe. The educational section of the day was drawn to a close with a panel discussion on the roles of cultural diplomacy and soft power in strengthening multilateral cooperation on the global economy. The first day concluded with a group dinner in a Mediterranean restaurant located on West Berlin’s fashionable Savignyplatz.

The financial crisis and solutions for recovery were the focus of the second day, during which the potential for global governance was widely discussed, tied in with regional perspectives from Estonia, Germany, and Denmark. The evening’s panel discussion began with a debate on the role of global governance organizations in monitoring and regulating the global economy, which was then discussed in further detail during an interactive panel discussion. Following the academic components, live music, food, and drink kept the group socializing and celebrating at the ICD House long into the evening.

The penultimate day of the program saw the issue of climate change take centre stage once again during the morning. Throughout the afternoon the focal point moved to reflection and analysis on the causes and consequences of the financial crisis, with the evening’s panel discussion asking speakers to consider the lessons learned from the crisis and the challenges that lie ahead. The speakers and participants ended the day at a traditional German restaurant, which provided an ideal opportunity for further networking.

The final day covered a wide range of topics, from sustainability and development to national reforms. The morning panel discussion looked at the major players in global politics and the challenges of interdependence. The final panel discussion of the program, later in the afternoon, provided a fitting conclusion to the event, with ICD Founder and Director, Mark Donfried, moderating an open dialogue between the participants and speakers as they looked to the future of the international economy and the role that global politics and civil society will play in the coming years. The congress ended with a farewell dinner at a traditional Greek restaurant in Charlottenburg, where attendees got a chance to share their experiences and final thoughts with one another.

François-Xavier de Donnea
Former Minister of Defense of Belgium, Former Mayor of the City of Brussels
“The Ethics of Aid and Trade and the Efficiency of North-South & South-South Cooperation”

Rainer Eppelmann
Civil Rights Activist, Former Minister for Demobilization and Defense
“Germany’s Unification: Prospects, Problems, and Challenges of the German Unification in Economics and Society 20 Years after the Fall of the Berlin Wall”

Dr. Susan George
President of the Board of TNI and Honorary President of ATTAC-France
“Global Governance Priorities in an Interdependent World - Balancing the Economic and the Environmental Crisis”

Hazel Henderson
Author and World-Renowned Columnist, Futurist, Consultant in SRI and Equitable Sustainable Human Development
“The Evolution of the Global Economy since 1989: Trends and Observations”

Dan Jørgensen MEP
MEP for Denmark, Deputy Chairman of the Committee on the Environment, Public Health and Food Safety
“The Politics of Climate Change”

Prof. Dr. Claudia Kemfert
Head of the Department of Energy, Transportation and Environment at the German Institute for Economic Research in Berlin (DIW)
“Sustainable Energy and Climate Change: Why We Need a Global Governance”

Dr. Katherine Marshall
Senior Advisor to the World Bank, Visiting Professor Georgetown University
“International Development Challenges for 2010: Where We Have Come, Practical and Ethical Challenges Ahead”

Amb. Dr. Makase Nyaphisi
Ambassador of Lesotho to Germany
“Moving Beyond Copenhagen: International Economics and the Future of International Cooperation on Climate Change”

Prof. Dr. Dipak R. Pant
Professor of Economics, Head of the Interdisciplinary Unit for Sustainable Economy at Carlo Cattaneo University
“Global Sustainability and ‘Extreme Lands’: Economic Policy and Planning at the Edge of the Anthroposphere”

Dominique Voynet
Former Minister of Planning and Environment of France
“Moving Beyond Copenhagen: International Economics and the Future of International Cooperation on Climate Change”

Prof. Dr. Lufter Xhuveli
Former Albanian Minister of Environment, Forests and Water, Agriculture and Food
“Renewable Energy and the Challenges of its Implementation in Developing Countries”

With an aim to provide an interdisciplinary analysis of the roles of global politics and civil society in international economics, the BIEC explored the effects of the global financial crisis and reflected on the challenges that lie ahead for international politics and economics. By providing a platform for stakeholders from the public sector, private sector, civil society and academia, the event provided a forum for a diverse range of perspectives and stimulated interdisciplinary debate and discussion on the key issues surrounding the future of the global economy.

The following topics outline the views of the speakers on the relationship between economic interdependence and global peace and stability; the benefits and challenges of corporate social responsibility and socially responsible investment; and the role of cultural diplomacy and soft power policies in strengthening multilateral cooperation in the world economy. The conference also aimed to produce clear policy recommendations to decision makers based on inter-disciplinary approaches and perspectives.

Other issues addressed include the new economic world order and international relations; moving beyond Copenhagen by bridging the gap between international economics and climate change; traditional industries in the information age; and ethics in aid and trade, looking closely at the related incentives and impacts.


Twenty Years after the German Reunification: New Global Challenges for Europe and the Transatlantic Relationship - Economic Challenges and Consequences

Sustainable Energy and Climate Change: Why We Need a Global Governance


Challenges for Education and Training in the Global Economy


The Future of Economic Globalization: Interdependence, Monetary Systems and the Role of Global Markets


Moving Germany’s Economy out of Crisis: Medium-Sized Businesses and the Automobile Industry

EU Decision-Making after the Lisbon Treaty: Better For Europe’s Economies?


Germany’s Unification: Prospects, Problems, and Challenges of the German Unification in Economics and Society 20 Years after the Fall of the Berlin Wall


Economic Issues Related to the Enlargement of the EU


Green New Deal: For a New Concept of Development


Creating Sustainable Economic and Environmental Strategies: A Danish Perspective in the Context of Europe


The Politics of Climate Change


Moving Beyond Copenhagen: International Economics and the Future of International Cooperation on Climate Change (Panel Discussion)


The Crisis, Households - and Equity


Learning from the Global Financial Crisis: Causes, Impact, and the Challenges Ahead (Panel Discussion)

Global Sustainability and ‘Extreme Lands’: Economic Policy and Planning at the Edge of the Anthroposphere

The New Economic World Order: The Rise of New Major Players in Global Politics and the Challenge of Interdependence (Panel Discussion)

Renewable Energy and the Challenges of its Implementation in Developing Countries

Economic Walls in the International Economy

International Development Challenges for 2010: Where We Have Come, Practical and Ethical Challenges Ahead

Following the successful conclusion of the Berlin International Economics Congress, and having reflected on the diverse perspectives offered by the speakers, the Institute for Cultural Diplomacy has derived the following conclusions and policy recommendations:

The Institute of Cultural Diplomacy would like to extend its deepest gratitude to all participants and speakers that made this event possible.