The International Symposium on Cultural Diplomacy in 2020 »

The International Symposium on Cultural Diplomacy in the Arab World »

International Symposium on Cultural Diplomacy in the Commonwealth »

"Cultural Diplomacy as a Means to Build Bridges between the Commonwealth & the World"
(London; August 27th-31st, 2020) More »

International Symposium on Cultural Diplomacy in the USA »

Germany 30 - The 30th Anniversary of the German Reunification »

 After Freedom: The Roads to Flourishing Edmund Phelp - (Laureate of 2006 Nobel Memorial Prize in Economic Sciences) »

The Growing Importance of Cities and their Role in defending Western Democracy Jan Vapaavuori - (Mayor of Helsinki, Finland) »

 Fall of Walls and Raise of Human Rights from Berlin to Pristina Mytaher Haskuka - (Mayor of Prizren, Kosovo) »

 Del otro lado, from the other side, the US-Mexico Wall  Vanessa Rubio Marquez - (Senator of the Mexican Congress) »

 Is the Berlin Wall broken Down? The Challenges of Today Liudmyla Denisova - (Ombudsman of Ukraine) »

If you Want Peace, prepare Justice - Confidence in the Judiciary, an Essential Value of the Rule of Law Augustin LAZAR - (Former Prosecutor General of Romania) »

It's not about the Wall. It's s about Freedom Lora Vidovic - (Ombudswoman of Croatia) »

 Reflections on the Economic Recovery Miracle: Eastern Europe after the Fall of the Berlin Wall  Marek Belka - (Former Prime Minister of Poland) »

Changes after Socialism in the Comparative Perspective Leszek Balcerowicz - (Former President of The National Bank of Poland; Former Deputy Prim Minister of Poland) »

30 years after the fall of the Berlin wall, what prospects for our strategy and architecture of security in Europe ? Joëlle Garriaud-Maylam - (Member of the French Senate) »

Something is There, that doesn't Love a Wall Lena Nazaryan - (Vice President of National Assembly of Armenia) » 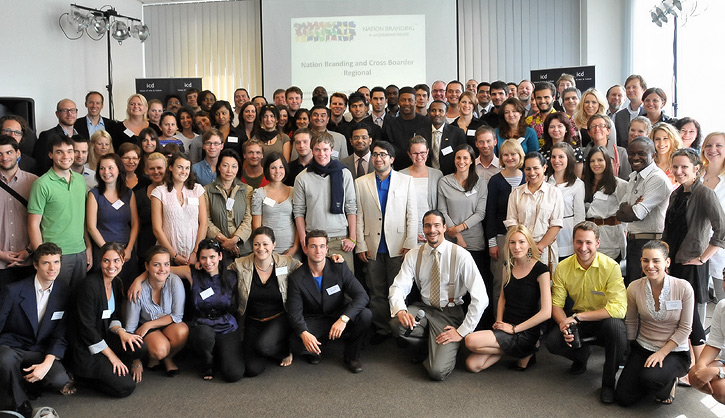 Cultural Diplomacy in Europe: A Forum for Young Leaders

The weeklong conference for “Cultural Diplomacy in Europe: A Forum for Young Leaders” took place in Berlin from the 29th of July to the 5th of August 2010. The program focused on the construction of a European Identity and the role of civil society in reconciling differences among neighbours, the responsibility and approach Europe should take in tackling climate change, the accession of Turkey and the integration of the Western Balkans.

Other issues addressed were the place of Europe in the global economy and the role of hard/soft and smart power in European foreign policy for the conduct of peaceful and stable international relations. Additional insights were given into the field of cultural diplomacy. Also leadership initiatives for young leaders were explored. Specific case studies of several nations allowed for the theoretical lectures and discussions to be placed into context for the participants.

The Cultural Diplomacy in Europe Young Leaders further benefited from participating in the international conference entitled “Nation Branding in a Globalized World”, which explored the concept of Nation Branding and its economic, political and cultural dimensions within the context of globalization and interdependence.
Speakers and participants examined the history and development of the term “Nation Branding”, the extent to which it is open to interpretation and the degree to which a country is able to shape its own brand. The event review for the Nation Branding conference can be found at: http://www.culturaldiplomacy.org/academy/index.php?en_conferences_nbiw_reviews
“Cultural Diplomacy in Europe: A Forum for Young Leaders” speakers included leading figures in contemporary European politics as well as many members of academia active in the non-for-profit sector.

The participants were awarded an official certificate of attendance at the end of the program, which confirmed attendance and provided details of the speakers who took part during the week and the topics discussed.

Monday August 2nd, 2010: The conference started with lectures introducing the topic of cultural diplomacy and the way several European countries have used it as a tool for foreign policy within and outside Europe. The participants also visited the German Parliament and were introduced to the future role for Europe as a political and economic actor in a globalised world.

Tuesday August 3rd, 2010: The second day of the forum considered the realities of climate change and global warming. As a global political and economic actor, Europe will have to take the lead in international policy making, especially after Copenhagen ended without resolution. The example of Scandinavian countries and their efforts of nation branding were also examined.

Wednesday August 4th, 2010: Three days into the conference, the participants were taken for a series of lectures to the Representation of the European Commission in Berlin. Most of the talks focused on the construction of a common European identity in order for Europe to increase and deepen the process of integration. Additionally the need for leadership and a European figure-head was highlighted, if the Union wishes to have a true supra-national character.

Thursday August 5th, 2010: The last day of the conference addressed the relationship between hard power, soft power and smart power and the role of cultural diplomacy in European politics and contemporary international relations in general. The role of sports in Cultural Diplomacy was also put to the forefront. The participants ended the conference with a farewell session.