After Freedom: The Roads to Flourishing Edmund Phelp - (Laureate of 2006 Nobel Memorial Prize in Economic Sciences) »

The Growing Importance of Cities and their Role in defending Western Democracy Jan Vapaavuori - (Mayor of Helsinki, Finland) »

 Fall of Walls and Raise of Human Rights from Berlin to Pristina Mytaher Haskuka - (Mayor of Prizren, Kosovo) »

 Del otro lado, from the other side, the US-Mexico Wall  Vanessa Rubio Marquez - (Senator of the Mexican Congress) »

 Is the Berlin Wall broken Down? The Challenges of Today Liudmyla Denisova - (Ombudsman of Ukraine) »

If you Want Peace, prepare Justice - Confidence in the Judiciary, an Essential Value of the Rule of Law Augustin LAZAR - (Former Prosecutor General of Romania) »

It's not about the Wall. It's s about Freedom Lora Vidovic - (Ombudswoman of Croatia) »

 Reflections on the Economic Recovery Miracle: Eastern Europe after the Fall of the Berlin Wall  Marek Belka - (Former Prime Minister of Poland) »

Changes after Socialism in the Comparative Perspective Leszek Balcerowicz - (Former President of The National Bank of Poland; Former Deputy Prim Minister of Poland) »

30 years after the fall of the Berlin wall, what prospects for our strategy and architecture of security in Europe ? Joëlle Garriaud-Maylam - (Member of the French Senate) »

Something is There, that doesn't Love a Wall Lena Nazaryan - (Vice President of National Assembly of Armenia) » 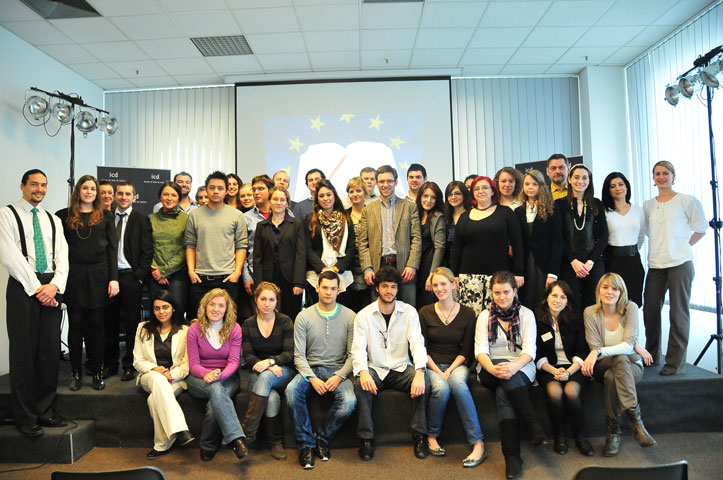 Cultural Diplomacy in Europe: A Forum for Young Leaders

The Forum for young leaders on “Cultural Diplomacy in Europe” took place in Berlin from the 15th to the 19th of March 2010. It brought together young students and professionals interested in the role of culture to foster productive diplomatic relations within the European Union. Speakers were drawn from academia as well as from the diplomatic circle in Europe, non-governmental organisations as well as cultural institutions. The main themes and debates of the week were centred on the role of arts, music and sport for cultural integration within Europe and the representation of the Union abroad. The consequences and implications of the Lisbon treaty were discussed in detail, as well as the issue of Europe forging a common foreign policy to tackle together the challenges of globalisation. The forum also benefited from specific countries’ perspectives on the future of the EU, as well as the ongoing importance of national identities for Europeans. Generally, the forum triggered enriching debates and discussion, thanks notably to workshops and panel discussions. The participants also had a chance to discover the historic city of Berlin through cultural and political lenses.

Monday March 15th, 2010: The first day of this year’s Cultural Diplomacy in Europe forum kicked off with an insightful introduction to the field of cultural diplomacy from ICD founder and chairman Mark Donfried. ICD managing director Peter Rees shed light on leadership initiatives that would be the focus for the week ahead. A trip to the European Parliament on the historic Unter den Linden in central Berlin followed. Late afternoon was marked by a speech from Slovenian ambassador H.E. Drobnič about Slovenia’s perspective on the individual’s contribution to united governance.

Tuesday March 16th, 2010: Day two of the forum began with an orientation in cultural diplomacy by ICD founder Mark Donfried. A trip to the Berlin Philharmonic followed, which gave participants an invaluable opportunity to see firsthand the orchestra that has played a leading role in Berlin’s musical life for more than a century. Sport was also explored as a tool for cultural diplomacy. Finally, the implications of the financial crisis for the EU were exposed to the participants.

Wednesday March 17th, 2010: Day three began with an intriguing discussion on “The United States of Europe  Dream or Reality?” This was followed by two talks on the treaty of Lisbon and its implications for Europe’s future. A speech by Ali Murat Başçeri, Deputy Head of Mission of the Turkish Embassy, on Turkey’s accession to the EU. The day ended with an introduction to a the Greek perspective on united governance.

Thursday, March 18th, 2010:The fourth day of the conference centered on the motif “The Future of the Economic Union,” and began with a speech by Karl-Erik Norrman, a Swedish diplomat and founder and President of the European Cultural Parliament. Norrman spoke about the cultural pillars of the European Union. Additionally, the potential clash between an European identity and national identity was explored, and a Latvian perspective on EU membership was offered.

Friday, March 19th, 2010: The final day of the forum began with a speech on EU foreign policy, with emphasis on Russian-European relations, by the Ambassador of Finland, H.E. Harry Gustaf Helenius. A tightly packed morning continued with two more speeches before lunch. The afternoon was marked by a trip to the German parliament, where the ICD’s Mark Donfried moderated a presentation of leadership initiatives. The forum proved to be an overall success, and closed to the tunes of salsa at the Havana Club in Berlin.